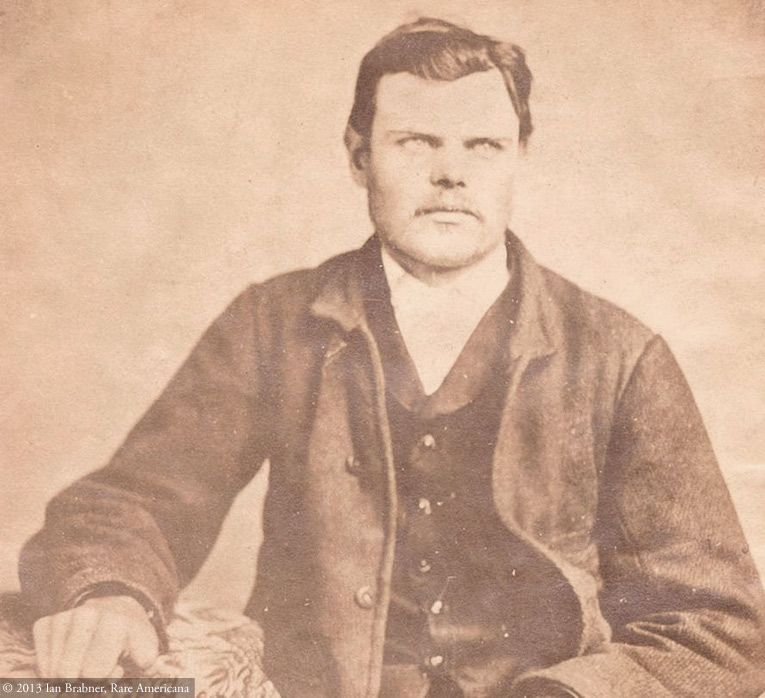 Anton Probst – Portrait of a Killer

A Bewildered Drifter. A 19th-century German-American immigrant, Anton Probst drifted from job to job in Philadelphia and Bucks County, Pennsylvania. Probst had tried military life; he drifted — or rather deserted — from that life, too.

No one would have heard of Anton Probst until he decided to hack to death the entire Deering family, six in all, in April, 1866. A hired servant boy and a female guest staying with the Deering’s suffered the same fate. Probst had drifted into the Derring family and gained employment of them.

After I killed the first boy I did not care if a hundred were there; if a hundred had gone there I would have killed them all without caring. I do not know why I felt that way. I had no feeling against the family, only I wanted the money. They always treated me well…” (Avery p14).

He does have his charms, doesn’t he? After Anton Probst was caught, he was tried by a jury. Confession. Ax. Hammer. Guilty. Then, Probst was hung. End of story? Not quite.

Inner Machinations of a Demon
The body of this demon-spawned killer had to be cut up, examined, discerned. What Frankenstein monster had Nature or God created? Physicians wanted to know. Budding criminologists wanted to know. The Public wanted to know. What would the autopsy reveal?

As you can imagine, there was aplenty of just plain speculation. Anton Probst’s cadaver served as a talking point for physicians and anatomists of the day who were intent on explaining or exploiting the inner machinations of such a hell-bent fiend. Phrenologists, and even Adventists, also had their opinions.

New$worthy
Americans were fascinated by a good horrific murder story in the 18th-century; the 19th-century continued the tradition. It was good money. The atrocities of Anton Probst made it to the popular press in the form of newspapers, pamphlets and books. In one edition of a Philadelphia publisher’s book on the murder, an albumen photograph of the murderer was pasted inside of the front cover. We’ve had copies of that particular book several times.

If memory serves, and sometimes it does, we had a broadside once advertising the display of the killer’s demonic arm (or brain or foot or something of that ilk) preserved, floating, in a jar for curiosity-seekers to see. Probst, in death, became a sideshow-like attraction, a money-maker.

The most interesting book concerning Probst’s crimes we have handled was an 1866 presentation copy from the prosecuting attorney, William Benson Mann (1816–1896), whom successfully sought the death penalty for Probst (see below). Benson inscribed and autographed the book on the whole sordid affair to a deputy sheriff who had personally escorted Probst to the gallows, to meet his Maker.

This is from our cataloged description →

This is McDade 774. Presentation copy from William Benson Mann (1816–1896), the Philadelphia district attorney who prosecuted Anton Probst for the grizzly mass murders Probst committed, crimes that shocked Philadelphia and the nation. Mann presents this copy to H. J. McIntyre, a deputy sheriff. McIntyre served in the solemn procession that took Probst on June 8, 1866 to the gallows, and witnessed his execution [see p118 within].

Per McDade: “[Anton] Probst was one of those mass murderers who, in a single stroke, obliterates a group of people. The Deering family of six, plus a hired boy and woman guest were all brutally hacked to death by him … After his execution the doctors had a field day with his cadaver, putting it through all kinds of tests, including one to test the theory that the retina of the eye of dying persons retains the last image seen. His head and right arm later appeared in a New York museum of anatomy and science [cf. McDade 772].”